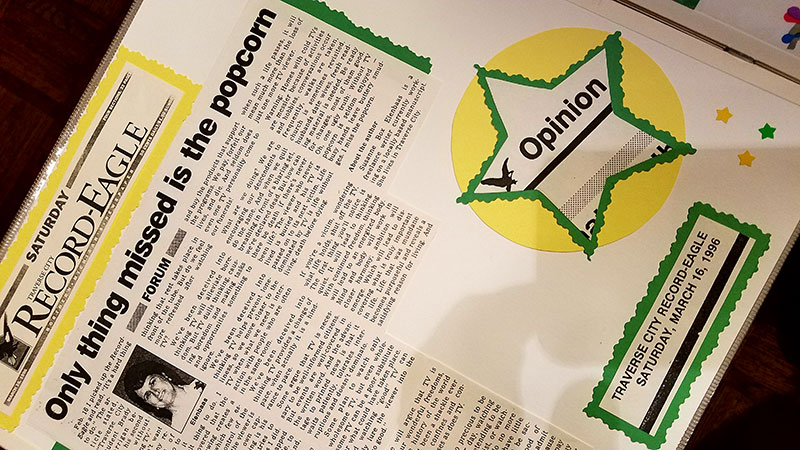 Feb. 16, I picked up the Record-Eagle and read, “It’s a hard thing to do.” The article stated, “Traverse City student Brady Harrigan begins his second year without watching TV.”

I didn’t want to see any reminders of “Just say no to TV.” I knew it was a difficult thing to do. I painfully discovered that the habit of TV viewing creates a wall-less prison which few escape. Under the control of the hypnotic glare of TV the viewer is seldom aware of his own captivity. He thinks watching is his free choice until he tries to change his habit – just as I did. Suddenly he finds he is trapped and unable, or nearly unable, to break its grasp. It’s tragic. And, it’s the norm.

Although I didn’t want to be reminded of all those ensnared by TV, I did want to know about Harrigan’s success. I read, “Harrigan has no regrets.” I thought, of course, Harrigan has no regrets. It is the viewer who should have regrets. Harrigan is free. Free to be who he is and who he can be. He is no longer sacrificing his optional time as a media sucker-upper.

Harrigan now has the freedom to play, run, read, learn, communicate, think unique thought, discover, work, enjoy homework, appreciate, invent, and to become an individual: not a minute part of an addicted mass blob. Harrigan broke free at 9. Imagine the childhood memories he will have – many of which may help add depth to his life and character.

We’ve been deceived into believing we can’t live well without TV when we can live better without it, or at least with less of it. My mother told about TV coming to her community in the ‘50s. The first thing she noticed was that when they got together with neighbors to play cards no one wanted to play. They just stared at the tube, and nobody talked. Soon, they quit getting together because TV had replaced conversation.

We have been deceived into thinking that rest takes place in front of TV, but do we feel more refreshed after watching?

We’ve been deceived into thinking TV alleviates boredom. But TV dulls thinking, causing boredom and making tasks and opportunities something to ignore.

We’ve been deceived into thinking TV helps prevent loneliness, so we move closer to the TV when what we need is interaction with people who are often in the same room.

We’ve been deceived into thinking TV provides a change of pace, when actually it is a hindrance to pace.

Some argue that TV is necessary to be well-informed citizens. But events are well-covered in the written word. And the advantage to printed news is that it waits patiently, tolerate interruptions and doesn’t dominate.

Some plan to watch only wholesome TV, but even wholesome TV can be a poor substitute for what could have taken place. And watching ‘good’ TV can easily lure the viewer into the ‘not so good.’

People will argue that TV is one of our wonderful freedoms, but in the history of the world there hasn’t been a shackle ever devised that confines and controls such masses as TV.

Aren’t lives too precious to be used up day after day, watching people who are pretending to be people who don’t exist, or watching sports teams that can do no more than win or lose? We have little optional time. Should it be sacrificed for the livelihood of Hollywood actors who often admit to seldom watching TV because they have lives to live? We pay for this imprisonment! We buy the TVs, pay for the electricity and buy the products that support the programs. We pay, forfeit our lives, and die. And seldom does even one TV personality come to our funerals!

What are we doing? We are encouraging our descendents to do the same. And when we quit breathing in front of a blaring set, we’re declared dead. But how can there be death if there’s never been life? The viewer who never lived is buried and his TV is passed on to its next victim. Life dominated by TV is life without living, death before dying.

If you’re a victim, wondering what life holds, shut off the TV. The first thing you’ll notice is quiet. It will lead to thinking. With continued freedom, thinking will lead to an energized body. Mind and body will work in closer harmony; ambition will emerge. Which will lead to discovering what is truly important in life. Life that was mundane becomes purposeful and reveals a satisfying reason for living. And when such a life passes, it will mean much more than the loss of just one more viewer.

Warning – homes with cold televisions are often messier, because of activities and hobbies, conversations occur more frequently, walks are commonly taken, church is sometimes revisited, some husbands and wives plan date nights, fresh reading material is needed. Be ready for changes, most of them good. Oh, one ugly truth, without TV popcorn is seldom enjoyed – busy hands leave buttery smudges. I miss the popcorn.