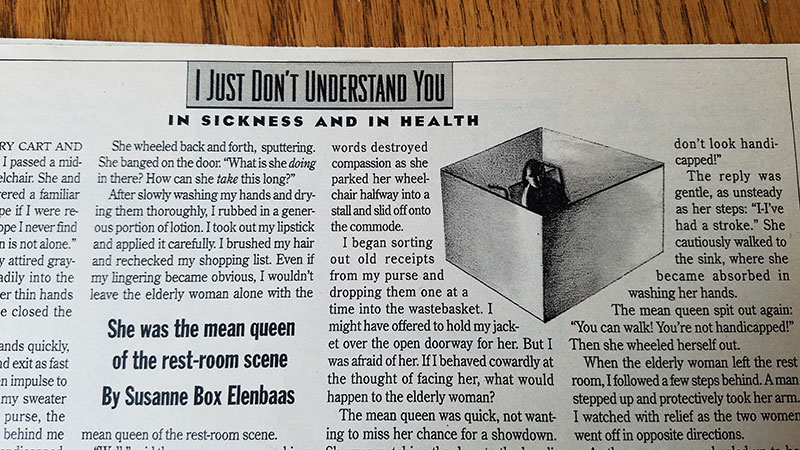 As I left my grocery cart and headed for the rest room, I passed a middle-aged woman in a wheelchair. She and her companion triggered a familiar thought; “How would I cope if I were restricted to a wheelchair? I hope I never find out. Well, at least the woman is not alone.”

In the rest room, a neatly attired gray-haired lady walked unsteadily into the only “handicapped” stall. Her thin hands
grasped for support as she closed the door behind her.

My habit is to wash my hands quickly, shake off the excess water, and exit as fast as possible, but this time, I had a sudden impulse to stay. As I was straightening my sweater and adjusting my shoulder purse, the wheel chaired woman passed behind me and tried the handle to the handicapped stall. When she found it locked, she let out sounds of disgust for all to hear.

She leaned over the arm of her wheelchair and peeked under the door of the stall. When she spotted a pair of medium-heeled shoes, she said loudly, She probably isn’t even handicapped.”

She wheeled back and forth, sputtering. She banged on the door. “What is she doing in there? How can she take this long?”

After slowly washing my hands again, and drying them thoroughly, I rubbed in a generous portion of lotion. I took out my lipstick and applied it carefully. I brushed my hair and rechecked my shopping list. Even if my lingering became obvious, I wouldn’t leave the elderly woman alone with the mean queen of the rest-room-scene.

“Well,” said the angry woman, speaking as if onstage. “I can’t wait any longer! I’ll have to leave the door open. You can watch if you want. I won’t have any privacy!”

Every motion she made maneuvering into place was filled with rage. Perhaps she was trying to evoke sympathy, but her icy words destroyed compassion as she parked her wheelchair halfway into a stall and slid off onto the commode.

I began sorting out old receipts from my purse and dropping them one at a time into the wastebasket. I would have offered to hold my jacket over the open doorway for her, but I was afraid of her. If I behaved cowardly at the thought of facing her, what would happen to the frail, elderly woman when she came out?

The mean queen was quick, not wanting to miss her chance for a showdown. She was watching the door to the handicapped stall when it slowly opened.

The elderly woman gingerly came out. All her strength and concentration seemed focused on her next movement. But the mean queen didn’t notice, or pretended not to notice, the elderly woman’s condition. “What’s wrong with you? You don’t look handicapped!”

The reply was gentle, and as unsteady as her steps, “I…I’ve had a stroke.” She cautiously walked to the sink, where she became absorbed in washing her hands. The mean queen spit out again, “You can walk! You’re not handicapped!” Then she wheeled herself out.

When the elderly woman left the rest room, I followed a few steps behind. A man stepped up and protectively took her arm. I watched with relief as the two women went off in opposite directions.

As the mean queen wheeled up to her companion, I realized my first impression had been mistaken. The woman was alone, imprisoned by walls of anger, confinement far more restrictive than her disability.

Mean Queen of the Rest-Room Scene
This essay on handicap stalls got the attention of some nationally syndicated columnists, Ann Landers and Yvonne Duffy.