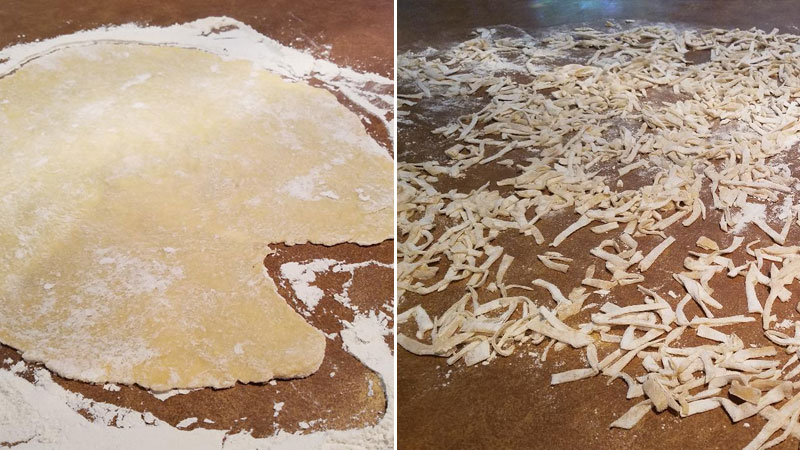 As a kid, I do not know how many times I walked next door into Grandma’s kitchen, to find her rolling out a flour chamois. Once it dried enough, the chamois would be rolled up into a cylinder. At one end, she would slice, on the diagonal, thin tender noodles.

Grandma seemed to know everyone’s favorite food, and mine was her noodles. So often, when she was fixing them, she gave me some. It is Grandma’s noodles, minus the meat, (We have a vegetarian who loves the noodles.) which I serve as a side for our Thanksgiving and Christmas dinners. For those holiday meals I make three batches of noodles and boil them in a gallon of rich, homemade, chicken stock made from stewing two, or three, large chickens. The noodles are a favorite of many. The stock and the noodles are made weeks in advance, frozen separately, and boiled up the day before the holiday. Perfecto!

In between such occasions, I make a simple chicken noodle soup with a rotisserie chicken and one batch of Grandma’s noodles, taken still moist from the counter. I am making the soup this week. Ron and I will be taking a meal to a wonderful, ninety-two year old man, who is ever faithful to God, while waiting anxiously to join Him in His Heaven. The gentle German, though he has lived in America since he was a young man, still speaks with an endearing accent. He is a member of our Daily Dozen prayer team which prays by name for the spiritual-growth of everyone who attends our church. He is a true, and mighty, prayer warrior. Oh, the lives that have been encouraged through prayer from the privacy of his beautiful home.

Helpful hint: Whenever you bake chicken, and don’t need the fat which collects, freeze it, and use it for making gravy or adding to thin chicken stock. It may seem to small of an amount to bother with, but save it, and save others, and you have something I consider – nearly gold. My reputation is such, that some people give me carcasses that they would have otherwise thrown away!