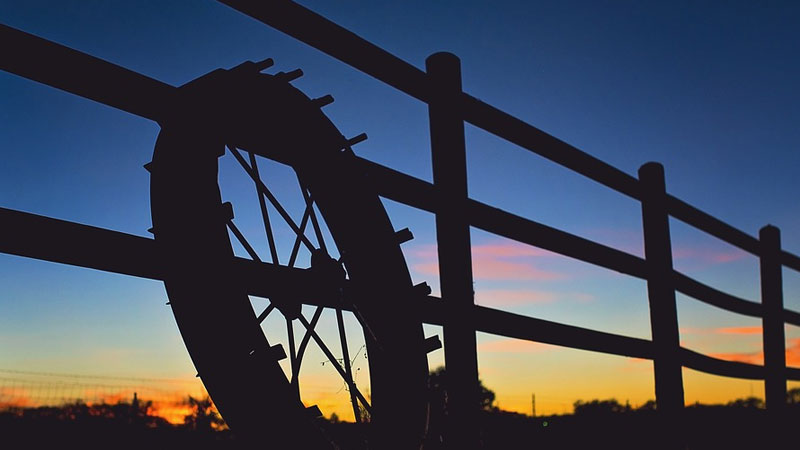 Dear One, the old memory of me accepting Christ remains an odd one. I was 16 at the time. And when I look back I wonder how was it that when I responded to the altar call, I did not walk forward, but walked backward – out of the church and into the dark. There at the edge of a gravel parking lot and a cow pasture, I leaned over a fencepost and cried. That is about all I can remember.

It happened while I was visiting a Baptist church with a friend in the nearby town of Marion. The church was unlike my family’s Presbyterian Church, which never to my knowledge, gave an altar call.

I do remember what happened after that…not much of anything. When I got home and told my Mother what had happened she seemed more worried than pleased. She kept patting my shoulder and repeating, “There, there, it will be alright.” We never spoke of it again. My life went on as it had before…living out the pattern I believed was the Christian way of life which included attending church on Sundays and youth group on Wednesdays.

Though unaware of it at the time, I later came to the understanding that Jesus must have come into my heart while I sobbed over the fencepost. For I never responded to any other such invitation. But Jesus had to have answered my call. He must have, for eighteen years later, after a few classes on the Holy Spirit, I felt compelled to sit alone with my Bible and read and pray and pray and read, and quietly think about what I was reading.

At that time, after years of continuous church attendance, I knew little more about the Christian life than I had known as a youth. I thought that the Christian life was ALL about outward behavior…living honorably, according to the Ten Commandments.

That was UNTIL something incredible happened. I discovered it was also about being, BEING with God, alone with Him and His Word.

The Word of God became a living, breathing
Truth, a Truth which penetrated my heart.

Now, some forty years later, He is still meeting me in the quiet-time hours of the morning. That must be what is meant by joy-in-the-morning. Two worn out Bibles later, I still find His Word, the greatest treasure on earth, only second to His wondrous Guiding Presence.

People often talk as if God is hiding. He could not be easier to find. He resides in His Word, His living Word, and once we take Jesus as Lord and Savior, He resides in our hearts too. That intimately unites Man with God. After that, as we grow in obedience and reverently take the time to sit alone with Him and His Word, we are drawn ever closer and closer to Him. It is only then that Man moves from meaninglessness to purposeful living. One cannot know what he does not know until he knows.

“Though now you do not see Him, yet believing, you rejoice
with joy inexpressible and full of glory.” 1 Peter 1:8