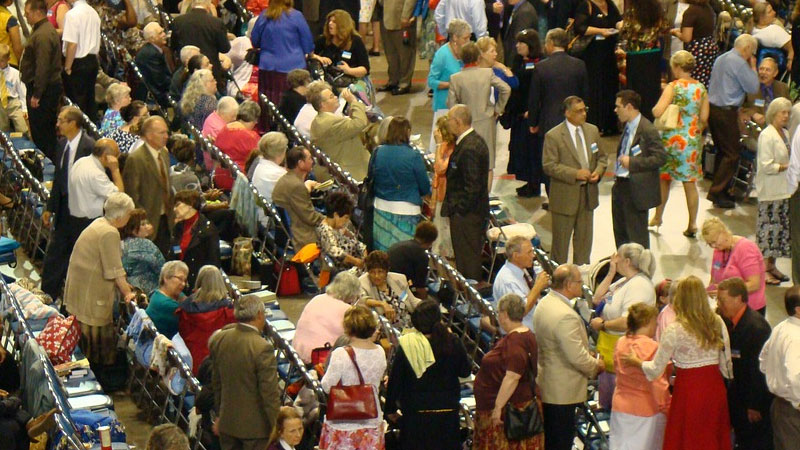 Dear One, over a week ago, we rented a twelve-passenger van, and attended a Tiger baseball game with some of our family. With long hours in the vehicle (stopped or slowed traffic extended the trip several hours), conversation sometimes traveled around much faster than we did.

When the conversation moved to public speaking, a lost memory was uncovered. I recalled, and shared, a truly ‘ridiculous’ experience. At the time, in the late 90’s, I was working for Youth for Christ, and had been asked to speak at a gathering for both youth and adults. My topic was to be quiet-time with God, the ‘importance of,’ and the ‘how to do it.’

It was a casual event. Not expecting microphones to be needed, leadership did not provide them. Oh, but they were! They were!

When I was introduced, I don’t think half the audience was aware of it. People were milling about, and the din from scattered conversations had been building even through the last speaker, a man with a voice far stronger than mine.

So there I stood, with the task of discussing QUIET-TIME – where no quiet existed. There was nothing I could do but speak as loudly as I possibly could. The reverent topic had to be presented, in what seemed to me, irreverence. My voice could hardly overcome the din. How will anyone take anything away from this? I am trying to example a time-of-quiet with a strained voice. I kept at it, did the best I could, got through it, felt defeated…and was totally and completely embarrassed, like a clown at a funeral – with a handful of deflated balloons.

Dismayed, I just stood upfront for a moment watching the activity before me, and fast-forwarded through the ‘bizarre’ effort. The only comfort I found for my suffering soul was… well I did my best.

That was my state when an unknown man walked up to me. He genuinely thanked me for the teaching? He said, “I know that I was meant to be here today. I needed to hear what you had to say.” The look in his eyes were filled with hope. I could not tell which it was, but it was either hope for a new, a renewed, or deeper relationship with God. He said once more how grateful he was, and walked toward the back of the room. As he did, I wondered, which of us, at that moment, was the most grateful?

As the man left, I no longer felt like a clown holding a dozen drooping balloons. A lost one, or nearly lost one, had been found. I walked away from the lectern confident of a successful close to a mission which had been nearly impossible. A man’s heart has been opened; and God was delighted, for God desires that all of His children would draw nearer.

Once again, the Lord had proven that nothing is impossible with Him. And another truth, which had been proven over and over again, was once more found true. All God requires of His people is that we do our best. Absurd as it was, I had.

« Do Not Destroy the Work
Dorothy’s Winning Lasagna »