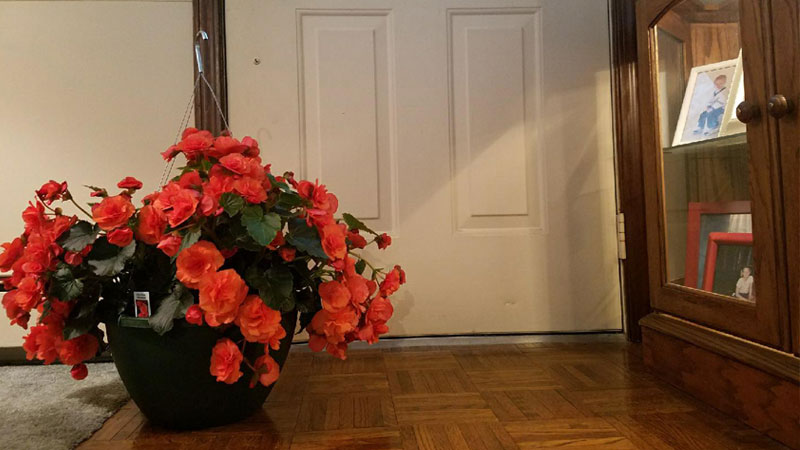 Dear One, the beautiful begonia I was given for Mother’s Day had been sitting on the porch. Just before heading to bed, fearing frost, I brought it inside. As I did, it struck me that such a slight movement from one side of the door to the other could mean life or death for the plant.

That made me think of mankind. Man commonly believes that the same two options apply to him, but not so, not according to Scripture. Man has eternal life, after death, his options are eternal life in Heaven, or in Hell. I cannot think of two greater extremes? And my heart goes out to all those who reject God, refuse His offer of salvation, suffer judgment, and then endure the misery of Hell.

When I think of those who are Hell bound, sorrow fills my being. Yes, sorrow for the lost, but even a deeper sorrow for God. For all are His creations, created for fellowship with Him, the author and creator of love. His despair for those who have chosen Hell must be immense.

These same thoughts were still on my mind, when I flipped on the bathroom light. There, I spotted a brown, recluse spider about the size of a quarter on the floor. If you are familiar with this type, you wish that you weren’t. Yes, we are calling an exterminator, for later I found another one.

As spiders go, it was a perfect specimen, strong and hearty. And if spiders can appear happy, it did. I grabbed three tissues, for it was a three-tissue spider. In just an instant, the life the spider had known was snuffed out, and its body swept away in one swirling flush. I thought, that’s how it is for Man. We move through our everyday lives, and in one swoop, what we had known is forever left behind.

Perhaps my thoughts that day were on the eternal because of a recent conversation I had with a couple of returning snowbirds. We discussed the many different, warm climate churches they had visited while away for the winter. They enthusiastically relayed an impressive lists of worship experiences.

With that said, I mentioned something that I had learned, sometime ago, something that was of great concern to me. It is another reason to step-up the battle for the Cause of Christ. I told them that our community ranked high on a national survey of de-churched cities. De-churched is a term for people who once regularly attended church, but no longer do. Their lack of response was as though I had just introduced a topic as innocuous as the weather.

I am sure it was that conversation, or lack of conversation, which has been powering my Hell or Heaven train-of-thought. For God desires that all would be on track to Heaven. He desires that none would be derailed, and that each of us with a ticket-to-ride Heaven bound would be fervently hawking additional tickets as if it was a matter of life…eternal.

“Then he (Jesus) said to his disciples, “The harvest
is plentiful but the workers are few. Ask the
Lord of the harvest, therefore, to send out workers
into his harvest field.“ Matthew 9:37-38.