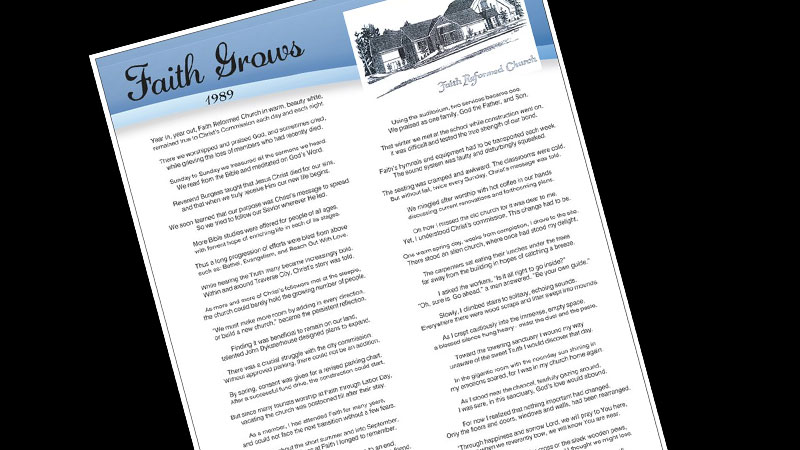 Dear One, after service, in the narthex, as Ron and I were putting on our coats, a lady said, “You’re an author. You should enter something into our churches’ ‘Jesus, the I Am’ art display.” Earlier that week, I had thought about entering a poem that I had written during a 1989 church expansion. So I took her encouragement as conformation that I should make the effort. Oh, and what an effort it was. Three people, besides me, had to suffer to finally see it come to completion!

Since the poem was 900 words, and would include a sketch of the old and new buildings, I planned to have it copied to an extra-large poster. For such projects, my go-to is Vistaprint through the Internet.

My first effort with an employee resulted in both of us giving up. I have limited computer skills, and old programs. But the next day, hope had been renewed, as hope is, and I tried again. Although, a good effort was made, it was fruitless. Finally, I was told that my computer program for transferring sketch images was simply incompatible.

I gave up, but hope would not. The next day, I went to plan B. I would call Vistaprint one last time, and order the poster with only the poem, and simply paste my pictures on it. That was my plan, that was, before ‘Michael.’

Michael is probably a global-work name, but that is the name I have, and will use. He works, and lives in the Philippines. I have read somewhere that, “Patience is not the ability to wait, but the ability to keep a good attitude while waiting.” That sums up Michael.

He looked at the poster with the poem, minus the images, and questioned my plans for it. He did not like my plan. He said, “We can do this, together, we can get your images in place.” I said that I had tried twice before, and that I didn’t want to try again. Again I heard, “We can do this.”

I said, “You will have to be an extremely patient person to make this happen. Again, his reply, “We can do this.”

I said, “I would hate to put you through the effort. I am not techie, and my programs are old.” He soon found out just ‘how un-techie’ I was, and how out-of-date my programs were, but he never laughed, at least, not out loud. For the next full one-hour and thirty minutes, Michael guided me through the front, back, and side doors of computer programming, hitting nothing but dead ends, conferring twice with graphic designers, until unbelievably a path opened up. It seemed as though a miracle had happened.

Soon, Michael provided an example of the finished product. It was wonderful, much better than I had envisioned. And through all that struggle, not once, not ONCE, did his voice ever waver, or his enthusiasm wane.

Up until that time, I considered myself a patient person. I was wrong. For though I do have patience, there has always been a limit to it. From Michael’s example, I have a better understanding of what God is asking of His people when he says to be patient. I don’t know if Michael is a Christian or not, but I know this, he has taught me to be a better one.

So, with a discount for $9.98, a beautifully designed poster for framing should arrive today for a woman who is patiently waiting. And, if it doesn’t arrive, there is always tomorrow.

“Be always humble, gentle, and patient. Show your love
by being tolerant with one another.” Ephesians 4:2

For those who attended Faith during the construction of ‘89, I am including the poem for your review.

Year in, year out, Faith Reformed Church in warm, beauty white,
remained true to Christ’s Commission each day and each night.

There we worshipped and praised God, and sometimes cried,
while grieving the loss of members who had recently died.

Sunday to Sunday we treasured all the sermons we heard.
We read from the Bible and meditated on God’s Word.

Reverend Burgess taught that Jesus Christ died for our sins,
and that when we truly receive Him our new life begins.

We soon learned that our purpose was Christ’s message to spread.
So we tried to follow our Savior wherever He led.

More Bible studies were offered for people of all ages,
with fervent hope of enriching life in each of its stages.

Thus a long progression of efforts were blest from above
such as: Bethel, Evangelism, and Reach Out With Love.

While hearing the Truth many became increasingly bold.
Within and around Traverse City, Christ’s story was told.

As more and more of Christ’s followers met at the steeple,
the church could barely hold the growing number of people.

“We must make more room by adding in every direction,
or build a new church,” became the persistent reflection.

Finding it was beneficial to remain on our land,
talented John Dyksterhouse designed plans to expand.

There was a crucial struggle with the city commission.
Without approved parking, there could not be an addition.

By spring, consent was given for a revised parking chart.
After a successful fund drive, the construction could start.

But since many tourists worship at Faith through Labor Day,
vacating the church was postponed till after their stay.

As a member, I had attended Faith for many years,
and could not face the next transition without a few fears.

So all throughout the short summer and into September,
I relived heartfelt times at Faith I longed to remember.

Sadly, when the final benediction came to an end,
I could do nothing else but grieve: as though losing a friend.

Tomorrow the eager carpenters will tear up this place,
and next year a narthex will occupy this very space.

I glanced beyond the pulpit to the familiar gold cross
wondering if this Peace I felt would forever be lost.

“Lord, it was here that we prayed to you year after year,
and when we reverently bowed, we felt You so near.”

Reluctantly, I lingered in the old sanctuary,
but family was waiting, I could no longer tarry.

For the eight month interim, we rented a place to meet;
a school, one block east, near the corner of Anderson Street.

Using the auditorium, two services became one.
We praised as one family, God the Father, and Son.

That winter we met at the school while construction went on,
it was difficult and tested the true strength of our bond.

Faith’s hymnals and equipment had to be transported each week.
The sound system was faulty and disturbingly squeaked.

The seating was cramped and awkward. The classrooms were cold.
But without fail, twice every Sunday, Christ’s message was told.

We mingled after worship with hot coffee in our hands
discussing current renovations and forthcoming plans.

Oh how I missed the old church for it was dear to me.
Yet, I understood Christ’s commission. This change had to be.

One warm spring day, weeks from completion, I drove to the site.
There stood an alien church, where once had stood my delight.

The carpenters sat eating their lunches under the trees
far away from the building in hopes of catching a breeze.

Slowly, I climbed stairs to solitary, echoing sounds.
Everywhere there were wood scraps and litter swept into mounds.

As I crept cautiously into the immense, empty space,
a blessed silence hung heavy – midst the dust and the paste.

Toward the towering sanctuary I wound my way
unaware of the sweet Truth I would discover that day.

In the gigantic room with the noonday sun shining in
my emotions soared, for I was in my church home again.

As I stood near the chancel, tearfully gazing around,
I was sure, in this sanctuary, God’s love would abound.

For now I realized that nothing important had changed.
Only the floors and doors, windows and walls, had been rearranged.

“Through happiness and sorrow Lord, we will pray to You here,
and when we reverently bow, we will know You are near.”

So things like the familiar cross or the sleek wooden pews,
had not evoked the presence of God I thought we might lose.

Nor was it the impressive design, or how big or small.
It became perfectly clear, that did not matter at all.

That sweltering day I learned that we never need fear.
God desires to draw ever closer to all His sincere.

Faith is not mere emotion from a particular place,
but the indwelling of God’s Spirit given through His grace.

“Next time obedience calls us to another new task,
Lord, help us to embrace the change while releasing the past.”

I see, it does not matter where we worship old or new.
“Holy Father all that matters is that we worship You.”
Susanne Box Elenbaas