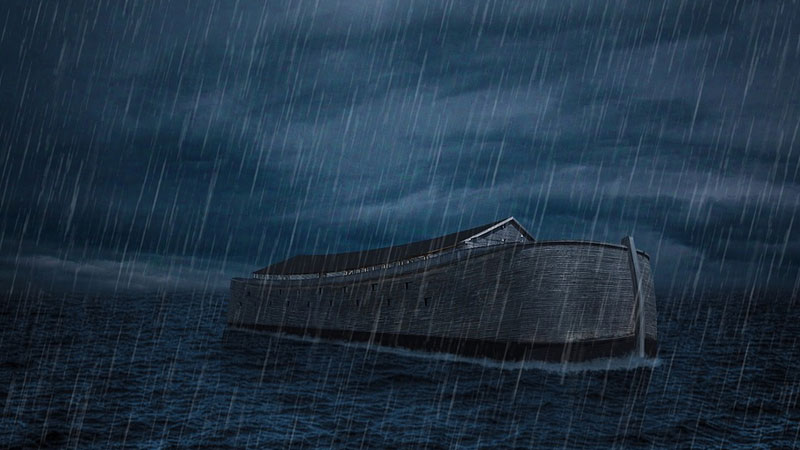 Dear One, how it rained last Monday night! In the dark of night, with the windows open over my head, I woke up with the rain falling as if from a sky-sized bucket. It almost scared me; in fact, it did, a little bit. From my pillow, my thoughts went back to Noah’s time. I thought of the people who had heard, or may have seen, the ark that some crazy man, and his sons, were building in anticipation of a disastrous flood. How foolish Noah and his family must have seemed. Following God’s leading can often leave one feeling alone, and out-of-step with the world.

When the worldwide flood started, and the rain kept coming, and coming, and springs of water gushed from the ground, fear must have gripped those outside the ark with heart-pounding panic. There was no chance for survival; there was nothing they could do to save themselves. They had no ticket-to-ride, for there was never an invitation extended for a once-in-a-life-time Barnum and Bailey cruise – except to Noah and his family. For in Noah, God found favor. Genesis 7:1 “The Lord then said to Noah, “Go into the ark, you and your whole family, because I have found you righteous in this generation.”

Doesn’t it seem that in today’s world, many Americans think they have God’s favor, and expect heaven in their future without having any, or little, regard for God and His Word? How can this nation, who’s primer was once the Bible, a nation who is considered educated, be nearly Biblically illiterate? It almost seems that in the modern-day ‘American Dream,’ God has been placed in the realm of mere fantasy.

Do you, like me, fear that wealth, a propensity toward ease, and recreation has taken our eyes off God? For it seems that sin knows no shame. These days, when someone implies that a behavior might be sinful, the suggestion is not received as a God-honoring, loving concern, but is soundly rejected. It is almost treated as hate speech, even within a growing number of our churches.

Now, long after the Flood, in this current go-round, we are all invited to God’s next Life-Saving-Journey. Our ticket-to-ride is found within the pages of Holy Scripture, the most published of all manuscripts. And yet, most copies are either gathering dust, or stored in some forgotten location. When death engulfs Man, like the rising waters of Noah’s day, sadly it may be – for many – too late to book a Heaven-Bound trip. If so, this time, it won’t be because passage was not offered. Jesus, in God’s Word, implores, “Come to Me...” Mathew 11:28 & 29.

Before prayer was banned from our public schools on June 25, 1962, spiritual life was different. Most of our nation’s children, who weren’t a part of a church, were still exposed in some degree to God’s Word, and prayer. That connection, as small as it may have been, gave people a place to turn when their lives fell apart. Tragically, with no, or little, knowledge of God, struggling people are now drowning in self-destructive behaviors.

After the Flood, God promised that He would never again send such a flood. Instead, He sent His Son, Jesus Christ, as our Savior. For those who sincerely take Jesus as Lord, and give God the Honor due His Name, they receive a one-way Ticket-to-Eternity. It is God’s loving desire that all would claim a Ticket-to-Ride.

“For God so loved the world that He gave His only begotten Son, that whoever
believes in Him should not perish but have everlasting life.” John 3:16

Blessings for another week,
Susanne

« You Are the One
Too Tired to Breathe »