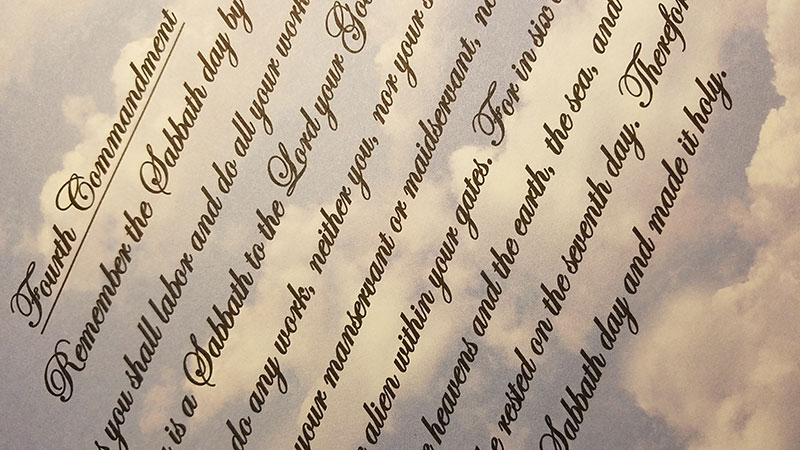 I would like to respond to Karen Anderson’s May 4 column, “Weekends are for R and R.” As a Bible-believing Christian I am in disagreement with several of her statements, such as, “I think that he (God) meant for us to rest, too – doing whatever is most nourishing for our souls. It that’s church, fine. If isn’t not, that’s fine too.”

Was it God’s intention to take a day away from us? Or was it His intention to bless us through this day set aside from the other’s? If we live out the Lord’s Day as he commands, won’t our deepest needs be met?

Ms. Anderson wrote that “…Sundays were (used to be) reserved for religion, not recreation.” She continued by writing that the Lord’s day was observed by her great-grandparents and that Nanna (Ms. Anderson’s grandmother) rebelled against her father and organized a game of croquet.”

Such action appears harmless, and by it self probably is harmless. But that act was followed by Nanna’s daughter (Ms. Anderson’s mother) stretching Lord’s Day activities by allowing movies on Sunday, and that was stretched by Ms. Anderson as she states in the following paragraph.

“Being productive at work and at home, on weekdays and weekends, I bring the same sense of urgency to the laundry and cleaning and cooking that I bring to my office. ‘After I finish this, I’ll relax,’ I keep saying until it’s Sunday night and there’s no time left to relax.”

The first, seemingly innocent, act taken to revise the activities of Sunday to include a game of croquet unlocked the room that held a myriad of distracting activities. One by one distractions were hauled out, cluttering up the Lord’s Day to the point of rendering it unrecognizable. And what is not recognized is not used, and what is not used is lost, and what is lost can affect generation after generation as it did in the sequence Ms. Anderson described.

Tragically, the scenario has been repeated all across our land. Through the years this nation has increasingly allowed the Lord’s Day to go by as just another day of the week, or perhaps like an additional Saturday. Today, generations are growing up without the family day of gathering, honoring God and resting. If we are not focused on God, our purpose will never be clear.

People are growing up painfully aware that something is missing in their lives, but are unsure of what it is. They join the hectic pace, hoping to find what’s missing. They run faster and faster, and wonder why they can’t make any sense out of their lives. They wonder because there is no sense to life without God. And in the meantime, values are being lost as the Lord’s Day is swapped for an ever-growing list of activities.

“The shadow of Robert Murray (1828-1906, minister and author) was long and dark,” wrote Ms. Anderson. I suspect it is not Murray’s shadow that lingers long and dark, but the rejected observance of the Lord’s Day, which causes anything else we do to leave us wanting.

Ms. Anderson ends her article with “The main thing is to feel thankful for a two-day weekend and find a way to celebrate. Find a way to rest.”

But Scripture states that the main thing to do on the Lord’s Day is to keep it holy. I have both observed the Lord’s Day and ignored it. And I have found it to be true that when I faithfully remember the day, honor the Lord, and keep it holy – I find rest.

Traverse City Record-Eagle 5-22-1993
Essay written in response to a 5-4 column,
Weekdays are for R and R

« What’s Happened to Sunday
Awaiting the Return of Mrs. Richardson »