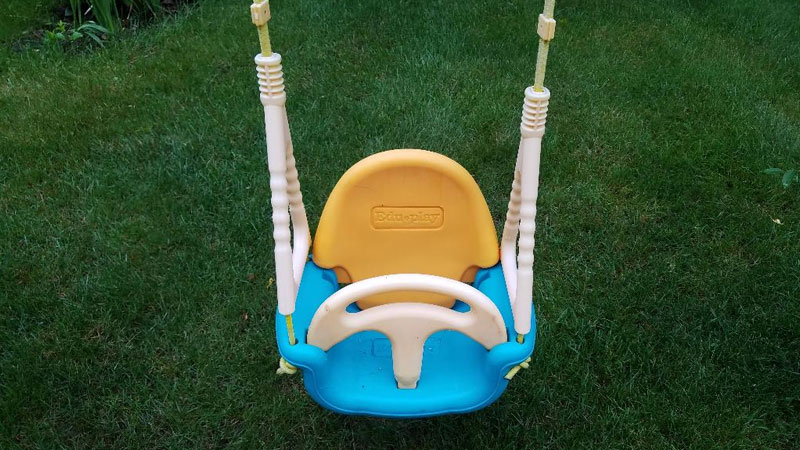 Dear One, Ron and I were outside one warm morning this past week with a granddaughter and three little great-granddaughters. While I was pushing the two-year-old in a baby swing, two of the greats were across the yard playing on the woodsy patio. The two-year-old just loves, loves, loves to swing. She was mesmerized, in her own world, happy and completely contented.

UNTIL in a split-second she wasn’t. I actually mean in a SPLIT second. As soon as she heard laughter coming from the patio, in shorter than an instant, she managed to do SIX things!

I will now try to convey to you the surprising speed-of-light movements that can be made by a two-year-old while in swinging motion:

One: her head snapped in the direction of the laughter.
Two: she pulled out the swing’s restraining bar.
Three: she dropped the bar to the ground.
Four: she fell to the ground.
Five: she was hit in the head by the swing.
Six: she cried out in pain

The little one, who had just a second ago been serenely happy was now in my arms wailing. Impulsively, without thought, she made a sudden decision to be a part of whatever the other children were doing. An action which led, as such sudden urges often do, to pain. After receiving a sympathetic lesson from me on inertia and gravity, she hurried to join the others.

With my eyes on her, as she scurried across the lawn, still wet and glistening from the morning dew, I thought of how we adults can become just as distracted by what our peers are doing. For in this current society, we often act like lemmings…following others over a cliff… forfeiting God’s call on our lives…behaving as though our godly purpose is stamped with an expiration date. Thankfully, unlike lemmings, such following rarely leads to instant death, but it often, too often, leads to spiritual atrophy.

It is such atrophy which has nearly emptied the European Church and is threatening to do the same in the Western Church. For there is a growing trend for believers to – without thought – ignore God’s call, and follow after their peers.

Hebrews 12:1b-2a
“…let us throw off everything that hinders and the sin that
so easily entangles. And let us run with perseverance the
race marked out for us, fixing our eyes on Jesus, the
pioneer and perfecter of faith.