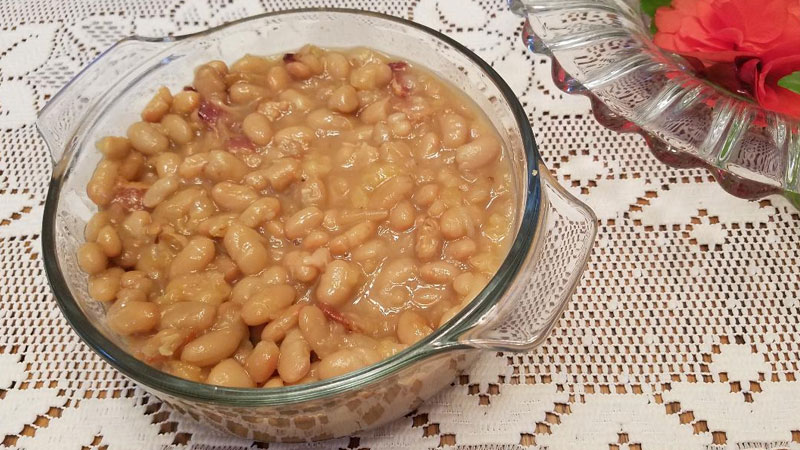 A few weeks ago, while grocery shopping, I ran into a couple from our church. When I was an elder-greeter, I got to know them well. Ever since then we have enjoyed running into each other. While catching up, I noticed that they had a jar of Randell Great Northern Beans in their grocery cart. Since I like the beans, and only have two recipes for them, I asked, “What do you do with your beans?”

We must all be cooks, for we excitedly began talking baked beans. I learned that their kids grew up enjoying their mother’s recipe. The couple would be taking a large amount downstate for their next family gathering.

Between the two of them they gave me the recipe from memory. I was advised that it might not be wise to tell anyone that the recipe took a small can of pineapple. Apparently their kids do not like pineapple. They told me that if I didn’t tell anyone, no one would notice. They were right. I could not tell that there was any pineapple added to the beans.

So, as I continued shopping I picked up all the ingredients needed. And the very next time I prepared a company meal, I used their recipe. My only problem was that they needed to bake longer than just one hour. I like beans to come from the oven thickly coated, and these were a bit runny. So next time, I will bake them two-and a-half to three hours, probably three. Also, I didn’t have enough bacon to cover the top of the beans. On my second try, I will top the dish with bacon and bake it until thick, but not dry. If dry, still in a very small amount of water.

My friends did not have a name for their beans, so I have named them No Name Baked Beans.

« Death a Change of Address
A Legitimate Complaint »