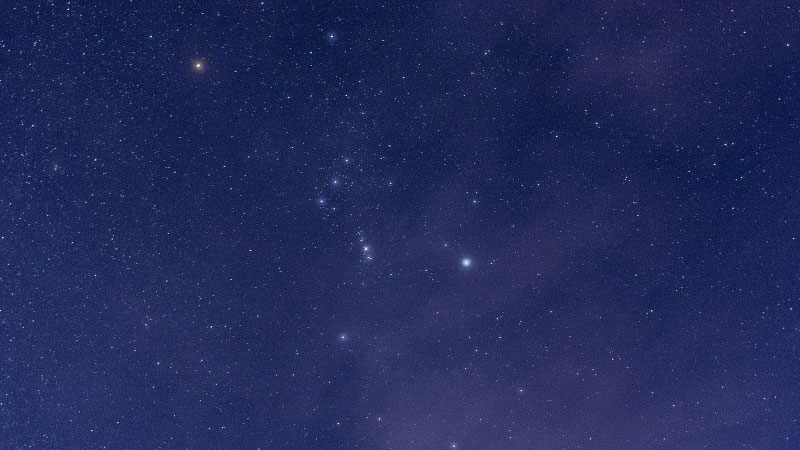 Dear One, if you are not familiar with Orion’s Belt, in the Orion Constellation, it is pictured above. just left of center, angling from right to left. The belt consists of three bright stars Alnitak, Alnilam, and Mintaka.

Long ago, when I wrote my manuscript, Three-Legged-Ladder, a work of fiction, it included a heroine named Elizabeth. While writing the story, I often pulled material from outdoor scenes from my youth in McBain and later scenes from here in the Grand Traverse area. The following is one of those. In this scene, Elizabeth, a wife and mother, is skating on an ice rink outside the farm home. It is well after dark. The black, velvet sky is filled with dazzling diamonds.

“Slowly, Elizabeth skates in wide circles around the rink remembering the moonlit evenings when she skated on the tiny lowland pond across the road from her childhood home. As a young girl, sometimes after supper, she would go off into the dark and skate over and over the intricate shadows of the majestic dying elms that encircled the lonely pond. At such times, thoughts became feelings, feelings of peace and unequaled satisfaction. Occasionally, she would stop and stand in awe of the deep silence of the snow-covered landscape and listen more intently to the music of her heart while looking up into the night sky strewn with stars. It irritated her that she was never able to settle on a favorite star…like other people did. For her heart was won over not by one, but by three stars, three which hung together in a straight line, evenly spaced, within the Orion constellation. Why is it that I have to have three stars? Why can’t I be satisfied with one? She could never make sense of it, but became convinced that those three stars, Orion’s Belt, were meant to be her stars.”

Those were my true feelings. And for years when I would look up into a beautiful nighttime sky, and find the three twinkling stars, I would try and settle for just one. But I could never do it. I had to have the three. I always wondered why?

Years later, I wholeheartedly claimed the three as my special stars. I did so with a new understanding that this life cannot be lived within the daily reality of God without a reliance, not only on God the Father, but on Jesus His Son, and the Indwelling Holy Spirit as well.

In my life, from that time to this, each of the three stars shines as a magnificent symbol of a Holy Triune God.

“May the grace of the Lord Jesus Christ, and the
love of God, and the fellowship of the Holy Spirit
be with you all.” 2 Corinthians 13:14