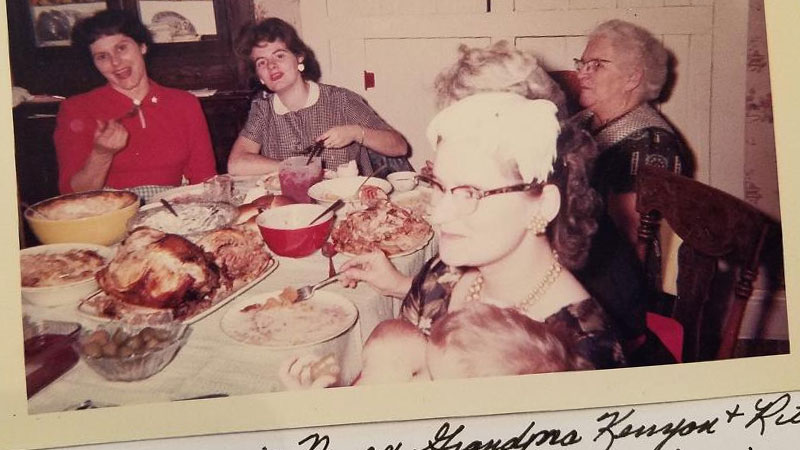 From eighth grade until marriage, I lived next door to my grandparents, William and Alta Kenyon. It was from my grandma that many of Christ’s teachings were learned, not so much from what she said, for she was a woman of few words. It was from her constant example.

It was there, in my grandparent’s tiny, old house, that many of our large extended family gathered for holiday meals. For those occasions a narrow table, with folding chairs, was setup in the living room. A sofa, and three upholstered chairs completed the tight living room seating. There was barely enough room to scooch between relatives and furniture.

The only ground level bedroom was just off the living room, and provided young cousins, of which there were many, a place to balance with plates in-hand on our grandparent’s bed. It sat five to six cross-legged goofy, little diners. Others were left to stand, perhaps placing their plates on the bureau. The dining room opened almost fully to the living room. There, a long table nearly filled the room, its placement adjusted to allow enough space to open the refrigerator – which didn’t fit in the kitchen.

The holiday routine went something like this; once the table was laden with my mother’s, my aunts, and Grandma’s best offerings, Grandma would recite the following prayer.

Heavenly Father, we thank you for this food,
and we ask thee to bless it to our use. Be with us
and guide us in this life, and at last save us in thy
kingdom. We ask this in Jesus’ name. Amen

After that the men would heap their plates, really heap their plates. It must have been a honed skill, for I have never since seen such artful layered servings. The men would be the first to take seating in the living room. The children followed, the first in line got a place on the bed. After the children dispersed, the women pushed back the serving dishes, creating room for their plates. I don’t remember seeing an aunt without a place to sit; there may have been.

The particular Easter that I am remembering stands out because of what happened once everyone had eaten, but were still grazing, which was the norm. From Grandma’s bedroom window, I spotted some strangers in a dilapidated car pulling in, and parking under a leafless apple tree near the road, the only space left. Curious, I left the confinement of the bedroom, just as an aunt stealthily entered from the kitchen, and whispered to an aunt, and that one to another. Something was up, but what, I wondered?

Instantly, while Grandma unknowingly sat enjoying a second dinner roll, she liked bread of any kind, the women frantically began clearing the table…serving dishes were flying, not even being covered before hidden away.

What was going on? I moved closer. As the aunts passed each other there were whispers, whispers not meant for Grandma’s ears, or mine. I caught a word or two here and there, “lazy…always looking for handouts…shiftless…shirttail…couldn’t find a free meal elsewhere.

When Grandma heard unfamiliar voices coming from the side-door entrance off the kitchen, she excitedly rose from her chair, anxious to greet whomever it it might be. While she was out of the room, my aunts worked all the faster to clear the table. When Grandma returned with the grubby looking bunch, she looked curiously at the empty table, and then to the aunts. Without reproach, she began to pull the serving bowls from wherever she could find them. The aunts sheepishly followed her lead. The unexpected guests were seated, and waited upon until stomachs were full or bowls had been emptied.

I could tell by the pinched looks between my aunts, that they were feeling guilty for their failed ‘Disappearing Buffet’ effort. For in all their years, and in all my years, none of us had heard a hint of criticism, or a word of gossip, from Grandma’s lips, or witnessed an ungracious act. For she had somehow managed to example that it is not enough to just know what Jesus would have us do; that serving Him required ‘doing it.’ Grandma treated everyone as though she loved them, for she did…out of the abundance of love she received from Jesus.

Many years later, while I stood at Grandma’s casket with two of my closest cousins, one said, “I never heard her say anything unkind.” The other agreed. I didn’t add my thoughts. I just couldn’t…the loss seemed so great.

But as the years pass, I find that the loss is not as complete as I had first imagined. For I still feel a close connection with my grandmother, through her examples. As I wrestle through life, I often recall how she might respond in a similar situation. And there is at least ‘one’ of her examples that I have put into practice, hospitality, and it has been fun. Thank you, Grandma.

“The love of a life well lived, lives on and on and…”

Blessings for the week,
Susanne

In the photo, my mother, Dorothy Box is far left, and my grandmother, far right.